I Deug-Su was a distinguished Medievalist and Koreanist of the University of Siena, in 2003 he has been awarded by the President of the Republic of Korea as best Korean humanist abroad. He studied in Perugia with Professor Claudio Leonardi, thereafter he has been teaching at the Universities of Lecce, Siena, and Arezzo. He was Visiting Professor in Belgium and in Berlin. For the Center of Comparative Studies of the University of Siena-Arezzo, he directed the publication of a series of Korean scholarly and poetic texts, also translated in English and German, which represents a unique venture in the field of the spreading the Korean culture in Western Countries.

His specialized studies in Italian, Korean and German faced issues such as Hagiography in the Dark Age, the relationship between religious ideology and culture in the Carolingian Age, and the Cistercian Mystical Tradition, as well as cross-cultural issues such as the comparison between the Oriental and Western Aesthetics, the “Western” canonization of the Korean Martyrs, which I Deug-Su studied thanks to microfilms held in the Vatican Secret Archives.

In Germany he undertook a research project on the Medieval origins of the concept of Europa, seen by the point of view of a Medievist from the East. The project is still going on thanks to his german students.

The University of Siena and the Institutions of Medievalist Studies, such as SISMEL in Florence, for which he worked as a consultant, remember him a still irreplaceable researcher for his numerous skills and his ability to create a bridge between apparently different cultural worlds. 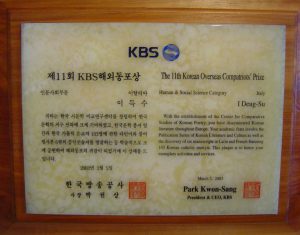